Alice "Sasha" Volkova is an 18 year old Russian/Japanese Ghoul Investigator born and raised in Murmansk, Russia, and one of the original batch of Quinx. She is the illegitimate daughter of Rokuro Shirogane, and the half-sister of Kenji Hamada. As of the events of Spotlight, she is currently in a coma due to cracking her frames and undergoing an unexpected surgery.

She generally goes by the nickname "Alisa", given by her mother.

Alisa is somewhat short for a slav, but by Japanese standards her height is pretty normal. She has a thin, almost underweight build since until semi recently she was starving as a prisoner of Aogiri. Until she was 18 she'd been a cripple with no legs, and due to the Quinx's regeneration she recently grew them back. Their probably pretty nice legs. Lately she has begun to wear more normal clothing when off work, such as sweaters and regular jackets.

During work she dresses more professionally, wearing a white trenchcoat with black trim, black shirt, and white tie. She is frequently seen wearing thick glasses to negate her ghoulishly sharp eyesight, which sometimes tends to cause headaches from over focusing.

Alisa's naturally blonde hair has been dyed Hunter Green. It's generally tied in a ponytail high on the back of her head, with a braid going around into it. When not working she keeps it down. Alisa's eyes are naturally bright blue, with her kakugan taking form in her left eye.

The most stoic and calm of the Quinx, but very far from the smartest.

Alisa has excellent control over her own behavior, constantly acting stoic and very rarely showing any drastic change in behavior. She isn't devoid of feeling, if anything she tends to think over-emotionally, but she's very good at acting cold and distant. This may lead people to believe she's thinking carefully, but it's actually the complete opposite. Alisa is skilled at fighting and has good instincts, but beyond that she's actually pretty unintelligent. That's not to say she's incompetent, shes actually a very obedient subordinate, but she should never be the one deciding what to do.

Though it doesn't normally show, Alisa does suffer from depression and anxiety. She displays very few if any goals in life, and simply continues on for the sake of assisting the other Quinx. She has a fear of hospitals due to her past trauma with them, and dislikes anything that restricts her movement. Despite generally wishing to get along with other people, Alisa is very stubborn. Her Squad Leader so far is the only one who's advice she's listened to, to the point of refusing to let her frame be removed without his approval, even if delaying risked her life.

Alisa enjoys pulling pranks and small jokes on other people, and in a way this is almost her way of showing that she cares for them. It's never anything too sadistic, but these instances of fuckery and bamboozlement are some of the only times Alisa shows any happiness.

Strengths: Although it's odd considering she didn't have feet for a while, she's surprisingly fast and has abnormal reaction times for a human, causing her to prefer dodging over blocking attacks.

Weaknesses:Her physical strength and endurance are low.
Alisa's first frame has been released, however the results of this are unknown until she wakes up.

Appearance: Alisa's rinkaku takes the form of four long, bright red tencacles. Muscly, fleshy, with brighter veins going through them. Towards the end the rinkaku protrudes silver blades, similar to the tails on the ends of fish. It's outer skin is encased in a silvery layer similar to scales, which slowly covers it the longer she leaves them out. It's kinda weird but hey so are fish. Strangely, the kagune seems to spasm at random and shows visible difficulty in making more precise movements with it.

Strengths: Lightweight, flexible, long, and sharp as fuck. Though it lacks precision it could be compared to a rope with knives on it.

Weaknesses: Although it's size makes it good for strangulation or even just slapping someone away, the more durable koukaku or more rounded bikaku could cut through it as easily as an actual fish. It's strange spasms and difficulty being controlled can make it imprecise.

Appearance: A long grey bow, with a guard covering the hand.

Strengths: The bow's ukaku shards are reasonably long (about a foot or two in length) and as a ranged weapon they provide a good advantage if the user can get decently far away.

Weaknesses: The shards can't pierce most kagune, and require a hit to the flesh to do any actual damage. The time to draw the arrow is an issue, as it takes about 5 seconds to load each one. The bow is useless at close range.

Mechanics: Unlike an actual bow, the quinque does not have any arrows. Instead when the string is drawn it begins generating a thin ukaku shard of about 2 feet of length.

Appearance: Belobog takes the form of a long spear, black with a white blade. Near the beginning of the blade are two sharp wings, identical to the wings of the ghoul it came from. The blade is reflective, and extremely white. The tip is made of a sharp but not very durable ukaku shard, while the rest is strong enough to withstand hits.

Strengths: The spears length provides it an advantage over shorter kagune and quinque, as expected from a spear. Additionally it's mechanic can be a major wound if it successfully hits someone. Other than the mechanic it's just a spear, and has the strengths you'd expect from one.

Weaknesses: Like any spear, it has difficulties in cramped spaces, or if someone manages to get too close for the blade to hit. After the mechanic is used it becomes an entirely blunt weapon, relying on being used as a staff for the duration of the blade's regeneration.

Mechanics: The front blade is actually a ukaku shard, and can be shot off once every few minutes, after which a new blade will slowly be regenerated. The side blades remain, however they are mainly decorative and won't be of much use. 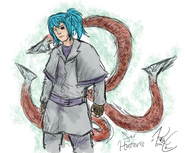 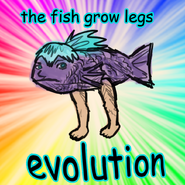 Alisa with most of the oiginal Quinx; (from left to right) Natalia, Kyousuke, Alisa, and Shouta 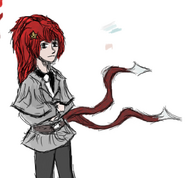 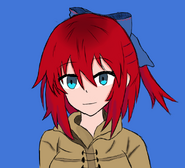 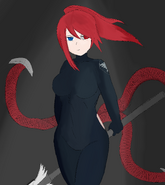 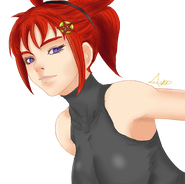 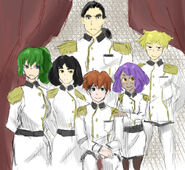 Alisa (far left) with the other Quinx

Retrieved from "https://tokyo-ghoul-roleplay.fandom.com/wiki/Alisa_Volkova?oldid=8456"
Community content is available under CC-BY-SA unless otherwise noted.