Amaya Natsumi (夏実 雨夜, Natsumi Amaya) was born in the 16th ward. She lives with her parents however spends most of her time out of the house. She is known to the CCG as Blue Bird (青い鳥, Aoi Tori).

Amaya has long, straight, light purple hair to go with her purple eyes. Her personality leads her to dress and act goth or emo. She always wears purple lipstick, and has two lip piercings, two to three ear piercings on each side, one eyebrow piercing and two purple tattoo X's on her chest, along with a tattoo choker made out of the same purple X's and the same on both of her wrists and ankles as well. Sometimes, she wears a purple or black choker over the tattoo choker.

She generally wears a white singlet with either no design or a black and white image and he wears black shorts, to go with her black and navy knee-high boots. She usually wears a black hoodie as well.

Her mask is a blue half mask covering the top of her face with a darker blue beak that goes over her nose. It has holes for both eyes, except there is a bar running through the middle of each eye hole. The beak curves down into a spike, and on the cheeks where it ends are pointed feathers, just like her Kagune.

Amaya is generally a cold person. She is sassy and sarcastic, however she has a kind side that she uses when talking to younger people or people she respects. When talking with enemies or general people she doesn't like, she is usually sarcastic, sometimes indifferent.

She usually creates bad first impressions, but is nice if you get along with her. If people approach her aggressively first off, Amaya will be put into a mad mood and will usually be disrespectful or sarcastic to that person. Amaya was given this personality by her parents, who don't care about her.

Even if externally, Amaya is being kind or happy, she is most likely always feeling sarcastic internally, and sometimes struggles to hold all of her sarcasm and sass in.

Amaya was born to ghoul parents, who were always cautious and took great care of their children, always providing them with food. When Amaya was little, she was really girly. She would always play with friends and be as social and nice as possible, always the center of attention.

This was until her dear younger sister, Maru, was killed.

Amaya, at this time 12, was on a walk with Maru, just a peaceful, calm walk, without a worry in the world. When they were on their way home, Amaya decided to take Maru down a shortcut, through a small alley that led out basically straight to their house. 'Nothing will go wrong', she thought. 'We're almost home', she thought.

As they turned the second corner of the alley, Amaya noticed something was off. She narrowed her eyes and pulled Maru back "Stop.." she hissed to her, looking behind them. She had turned back to face the front way and there he was, a member of the CCG. Amaya's eyes went wide and she turned, pulling Maru with her. 'We have to get back onto the main road.' is what she had thought then. Amaya pulled back as they turned the corner, when she saw that there was another member. They were backed into a corner.

Maru, so young and innocent, jumped in front of Amaya and yelled out at the enemies. She had said, "Stay back! I'm super strong and I'll kill you both!" What a bad decision. The inspectors knew that Amaya was a ghoul, and by now they also knew that Maru was too. The first enemy that they had run into killed her instantly, blood splattering everywhere. Amaya knew that she couldn't fight and, with tears in her eyes, fled. There was nothing she could do for Maru now.

When Amaya lost the enemies and got back home, she told her parents everything, tears streaming down her face. The parents looked at her with disgust and turned away. From that moment on wards, they had blamed Amaya for everything, blaming her for Maru's death. They were so angry and sad that they cast Amaya out and began to not care about her at all.

Appearance: Amaya's Kagune is two blue wings sprouting from her back. They are colored blue, ranging from light on the edges and going darker towards her body. They have a slight glow look fluid even when hardened, in attempt to trick the enemy that they are not actually hard. They are shaped to resemble blue bird wings, except the feathers are all pointed and very sharp.

Attacks: The main attack is the sharp feathers shooting out at the enemy, and after they have left the wings, they regrow at a medium speed, If she was to shoot from the start of the row, by the time she got to the very end, the first three would have regrown. At a close distance, Amaya can strike her opponent with the bottom row of feathers, that are all sharp and pointed down from above or strike them with the ends of her wings, which have feathers pointing out.

Strengths: It is a very fast kagune, which is mainly medium-long distance. The kagune is flexible, fast and easily controlled.

Weaknesses: Her short distance fighting is below average, and she struggles to block attacks from close up. Like other Ukakus, she tires easily. 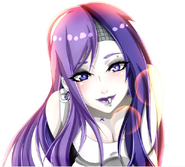 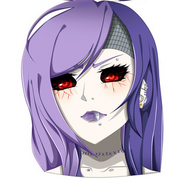 Add a photo to this gallery
Retrieved from "https://tokyo-ghoul-roleplay.fandom.com/wiki/Amaya_Natsumi?oldid=6062"
Community content is available under CC-BY-SA unless otherwise noted.