Asa Yakou is a strong Aogiri ghoul and the current leader of the 13th Ward.

Asa is of average height and weight for Japan, being 1.59 m tall and 51 kilos. She has a small frame, but she does have an athletic build and is quite fit, being somewhat muscular. She has a fair complexion, as well as moderately long, black, messy hair and blue eyes. Her attire is normally composed of blue jeans, a white shirt and a red jacket. When in combat, she may also wear the standard Aogiri cloak.

Asa seems to portray the average ghoul quite well - she is ruthless, brutal and cruel and she also possesses an overwhelming, passionate hatred for the CCG and humans overall. She appears to be quite rude and aggressive towards others, although seemingly she can also act mostly normal assuming she enjoys the company of her conversation partner. She knows that she's strong and isn't afraid to show it. Asa sees no wrong in making a display of strength every time she feels her authority challenged. And here is where she goes a bit overboard - she views any and all kinds of vocal dissent as a direct challenge, which means that she can be a pretty hard person to converse with, assuming one is more loose lipped than they should be. Despite having a very tough persona, Asa does have a single insecurity - illiteracy. She does not understand written language and she feels intimidated by the thought of it being something that is actually worth knowing. This is why oftentimes whenever one brings up matters related to schooling or academic knowledge, she either tiptoes around the topic or explodes into a violent anger in a bid to conceal what she believes could be the only thing she's inferior at. Apart from that, Asa appears to be particularly fond of determined and strong people - people that she deems to be similar to her. She even commends others that persist in trying to defy her will, because in that way they prove their "worth" in her eyes (although she's still hell-bent on establishing her word as the final judgement on any matter). Asa also feels a sense of inner duty to help out those whom are set on the same path as her. She herself isn't exactly sure why - perhaps it's sympathy, or perhaps just looking for possible rivals. Nonetheless, all she knows is that she truly enjoys being in the company of strong, similar-minded people.

Her tough life, upbringing and personality have also resulted in a specific, curious insufficiency of her character - she does not know how to be vulnerable. She is used to always being a strong, harsh person - as a result, she has little ability to deal with situations in which she feels vulnerable. This is not to say that her strength is a facade - on the contrary, it is precisely because she's always been strong and has never had to be in a weak position that she doesn't know how to deal with vulnerability. This insufficiency of hers shines through most visibly in her relationship with Minato Tomori. She's been shown to be jealous, possessive and and turbulently emotional when it comes to her boyfriend. It is much more crippling for her to believe that she has lost the affection of the person she loves than to be dealt a severe wound in battle. The reason for that is you're supposed to get wounded in battle so you are ready for it, but you can never be ready to react to something external that you've accepted as a cherished object, be it a romantic relationship or a platonic one or something else in that vein.

Not much is known about Asa's early childhood, but from what can be gathered from observation, it appears that the lives of her family and friends were all claimed in an operation led by an Otsuji. This is why she is shown to despise the clan of ghoul hunters and goes as far as showing excessive vehemence in her desire to put them in the ground. After the young Asa lost her family, she fled and moved around different parts of Tokyo, barely managing to survive, but still succeeding in the task of keeping herself alive.

Originally, when Asa was still a young child just entering her teenage years, due to all the fights she had participated in, she had already become plenty strong. In fact, she had become so strong that she quickly became noticed in her local ward. At the time, the 12th Ward was strongly contested between the Fox Gang and a rival group. Having drawn the attention of the Fox Gang, the group approached her and managed to get her on their side. Relishing in the chance to use her power, Asa killed and killed, until the opposing ghoul gang became so weak that it was trivial for the Fox Gang to drive them out. However, eventually the Fox Gang turned on Asa herself and kicked her out of the ward, due to her being too arrogant and aggressive. Cursing her defeat, Asa roamed the 13th Ward and plotted her revenge. She had also particularly taken note of Kota Okada, the man that the leader of the Fox Gang seemed to treat as his own son. She had never fought him in particular, but knowing that the Fox Gang leader was strong, Asa assumed that perhaps Kota was promising enough to capture the older ghoul's interest. This made Kota an object of interest to Asa as well, considering she had always been looking for powerful peers.

Nonetheless, as time went by, she eventually ran into Gemini, a powerful Kakuja ghoul that had managed to establish his notoriety throughout Tokyo. At first, they only collaborated due to their common links - random ghoul gangs that tried to enlist every bit of muscle they could gather. The two seemed to run into each other more and more frequently and for the time even had friendly relations. Asa herself always viewed Nikki as a figure to admire due to his power and ruthlessness. Despite not being able to acknowledge that, the man had become her role model back then. Eventually, once Nikki destroyed one of the ghoul restaurants and left the ghoul underworld in order to create Anteiku, Asa and him entirely lost contact.

Appearance: Her kagune is very simplistic - it's a big, thick, curved Koukaku blade enveloping her right arm. It somewhat resembles this, but it is curved, bigger and longer.

Strengths: Asa's kagune boasts extreme durability. It is strong and sturdy, allowing it to withstand powerful blows. It is also pretty sharp. 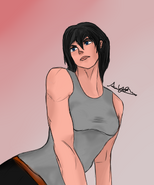 Asa by /u/CardistryWolf
Add a photo to this gallery

Retrieved from "https://tokyo-ghoul-roleplay.fandom.com/wiki/Asa_Yakou?oldid=8290"
Community content is available under CC-BY-SA unless otherwise noted.