Atsui Koi is a small male ghoul residing in the 21st ward. He works as a freelance artist, practicing a wide variety of artistic mediums. As a secondary source of income he frequently trades items in the black market, usually stolen goods or drugs.

Koi has a small figure, standing at 5'4" and 125lbs. Although small, he is surprisingly well built for his size. He has medium length hair with long bangs that he pushes to the left, generally covering his eye. He prefers to dress in a minimalist streetwear style, preferring greyscale colors and tighter fitting clothes with plenty of layers.

Koi has a standard bikaku kagune with a brush of thin kagune tendrils at the end that forms into a brush. The brush functions much like a real brush would, being able to hold fluids such as kagune secretions, or "paint".

Koi puts on a pleasant, albeit a bit distant air for most people, being concise, polite, and a bit cryptic about his feelings and intentions in social interactions. Although he is easily agitated and annoyed, he rarely shows these emotions publicly, instead preferring to stay silent and ignore them, although he has exceptions for certain people.

In stressful situations Koi is seen to be quick-witted and creative, being able to make decisions on the fly to alleviate whatever problem he may face. Koi's personality when he's hungry or in life-or-death situations have yet to be seen.

Little is currently known about Koi's life as a child. By the age of 14 Koi was already tangled in a life of crime, frequently resorting to theft and selling illegal substances to provide for himself in the 21st ward. Living in a relatively safe ward, Koi had little to worry about in terms of being a ghoul, having scarce competition with other ghouls as well as the CCG.

During a trip to the 20th ward Koi encountered 3 thugs picking on a lone girl. Deciding to help her out he took out the thugs but was injured by a quinque in the process, leaving a scar on his neck. He was saved by the girl who ended up being a ghoul as well. Named Cher, they quickly bonded over their similar situations and positions in life. Together they pulled off many stunts throughout the city of Tokyo, until one day Cher disappeared. After seeing her in the streets of the 21st ward after months of absence, Koi made it his goal to figure out what she had gotten herself into.

Being a Bikaku ghoul, Koi has no notable weaknesses to the other RC types. He is quick-witted and creative, being said to able to think up plans on the fly. He has also shown exceptional skill with his kagune and is somewhat experienced in hand-to-hand combat.

Appearance: Koi's kagune takes the form of a standara bikaku tail with a brush of thin tendrils at the end of it, making the tail itself look like a paintbrush. His tail also has the unique ability of Kagune Secretion, and is able to hold fluids or paint. Koi uses this to make a floor or surface slippery for his enemies.

Mechanics: Koi's tail functions like what a real paintbrush would.

A drawing from Koi's sketchbook 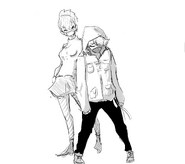 Atsui Koi and his friend, Cher.
Add a photo to this gallery

Retrieved from "https://tokyo-ghoul-roleplay.fandom.com/wiki/Atsui_Koi?oldid=5786"
Community content is available under CC-BY-SA unless otherwise noted.