Brandon Kado is a ghoul who resides in 5th Ward and works as a librarian.

Brandon has silver colored, shoulder length hair which he ties up during his work because of workplace requirements. Brandon also has light brown eyes as he wears round glasses. He has small stubble right on his chin.

Calm and collective. Very mature. Quick to understand things. great planner, very OCD. Quite Friendly and caring, never one to shy away from someone in need of help, especially when they share an interest in creative arts. Has a fear of being in large empty spaces (like the opposite of claustrophobic, at least 2 things [objects, people, animals] other than himself must be in the large space for his fear to cancel out)

Stayed with family up until the age of 18 from which he left and moved to the 5th ward. History yet to be written.

Strengths: Able to focus on his goals, quite fearless in most situations, Light weight and agile (agile when not tired), very literate, extremely intelligent.

Weaknesses: Not great in close combat (as of now), Can lose focus on surroundings when engaging in close combat. Defence is below average, relies on skill, not so much strength

How would he protect his establishment from doves, if he can't even beat the rat's underneath them? (The Way of the Sword) 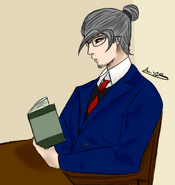 Retrieved from "https://tokyo-ghoul-roleplay.fandom.com/wiki/Brandon_Kado?oldid=6017"
Community content is available under CC-BY-SA unless otherwise noted.