Start a Wiki
Dice is a ghoul affiliated with Aogiri Tree, known for his fractured and sporadic personality. He collects game dice.

Dice is a pale and sickly looking ghoul with a drawn face and an almost unnaturally thin physique. He is on the small side and has long, thin arms and legs. His lank hair is jet black and is cut to varying lengths lengths, falling wildly around his head. His eyes, when he hasn't forcefully removed them from his own head, are a deep emerald green and have a perpetually wide-eyed insane look about them. He has multiple piercings in his ears, lips and nose. His clothing consists of a ragged shirt and pants, torn and stained with blood and dirt, and a torn aogiri cloak that falls just above his knees. Underneath the cloak he wears a dirty checkered waist-coat and a necklace of game die from which he takes his name. These are of different sizes, shaped and colours.

After the dismemberment and killing of Kazuko Akita Dice went through a makeover of sorts. He now wears a collection of plundered clothes collected from the corpses of Aogiri victims. He now wears sneakers, scuffed jeans, and a plaid shirt with an Aogiri armband on his left arm. He wraps the remnants of his old cloak around his head and neck like a scalf, and his new mask takes the form of three faces of a die, featuring the 1, 2 and 3. The face with the 1 has an eye hole to see through. The left side of his head from about ear height is shaved after it and is ear were forcefully removed during combat. His ear of course grew back.

Dice is a manic schizophrenic constantly wracked with hallucinations and a disconnect from reality. To him names and meaning are of a secondary importance. As he sees it, the world around him is constantly changing, objects never retain the same shape for long, shadows constantly move and talk to him and he has trouble discerning between people. He thinks himself lucky to be the only one to see the world in such a light and this obsession with luck led to the creation of his die collection, which he always keeps on his person. Similarly he feels sorry for the world and people around him who can't understand his visions and resolves himself to put them out of their misery in the most fantastical way possible.

Dice speaks in the third person.

Dice's kagune takes the form of a long bone coloured and textured blade that extends around his right wrist. The blade seems to alter its shape randomly, having taken both the form of a long spike as well as a vicious hook at different times. It has been shown to be able to alter in length up to a meter to barely protruding from his wrist.

Original: Above the wrist it takes the form of overlapping bone plates that follow the outer side of his arm all the way to his shoulder. By outward appearances it seem inflexible, but the combination of separated plates, and a thin, liquid like red muscle that connects them and seems to fill the bone plates, allows it to be manipulated easily.

Current: After recent events, the bone plating of the kagune has become thicker and has fused. As of now there are only three notable joints in his kagune: at the wrist, elbow and shoulder. The uppermost portion of the kagune takes the shape of a large plate shoulder guard that extends to guard half of his head. The red muscle has also become thicker and stronger, which now allows it to be manipulated without relying on his own arm. This effectively provides him with a third limb.

Dice seems to either have an abnormally high pain threshold, or a completely different concept of pain (if any at all). He has been shown to relocate his dislocated jaw with no side effects other than slurred speech. 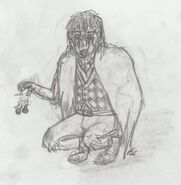 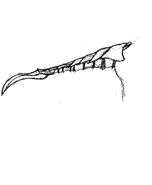 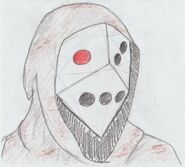 Retrieved from "https://tokyo-ghoul-roleplay.fandom.com/wiki/Dice?oldid=8226"
Community content is available under CC-BY-SA unless otherwise noted.