Hisae Shigeki Otsuji is a ghoul investigator that underwent the Quinx surgery and is currently working in the Quinx squad.

Hisae is a slender, or rather, thin young woman standing at 5’1”. Her hair is jet black, and she usually wears it hanging straight and loose with bangs. Basically, this except black. Her eyes are a pretty, alluring amber. She has a smaller chest, pale skin, and a round face. Often times, she wears minimal make-up, enough to hide imperfections, but not enough to be too noticeable. She dresses rather plainly, usually in large t-shirts or off-shoulder tees, capris, and canvas shoes. Her fashion sense has often been described as rather plain, especially for an Otsuji.

Hisae is known to be pleasant and polite to all who speak to her. She also appears to be very quiet and reserved, at least until someone approaches her. She revels in the opportunity to socialize, especially with older women. She fears and distrusts men, though she will rarely let it show to others. A result of this is that she will typically obey any order issued by a male for fear of repercussion. Due to the events surrounding her mother’s death, Hisae was forced to grow up rather quickly and is said to have been mature from a young age. She is fiercely dedicated to the her job at the CCG and despises ghouls. Her foster family in the CCG being the Otsujis, they were quite strict, so Hisae spent her days mostly training or studying. In the little free time she had, she attempted to hang out with the other students, although given her maturity, she could never truly connect with anyone her age. Many kids also found her behavior odd and stilted leading to her ostracization early on. In reality, her unusual behavior was the result of her putting on a mask in an attempt to fit in.

Adopted by the Otsuji family after her mother was killed by her stepfather.

Strengths : Hisae is quite dextrous as a result of her Junior Academy training. Additionally, she has developed good reflexes over the years thanks to both her unfortunate upbringing and her training.

Weaknesses: Subpar regen due to lack of RC pathways. The rest is unknown, you filthy powergamers.

Severely sharp. The ridges on each segment and the blades allow for the majority of each tentacle to be serrated. Decent regen (better than her body, at least).

When deactivated, it is a rather plain design, with the innards of the quinque laying bare. It fits onto Hisae’s arm as a black leather elbow-length glove. The RC cell storage portion of the weapon is strapped around her arm with steel clasps and lies on the underside of her forearm. A small capsule bulges slightly off of this portion of the quinque, holding the RC injection mechanism. Starting at her wrist and following over her palm is a quinque steel reinforced weave designed to protect her from the deployment of the blade. Around her ring finger is a sturdy ring that is attached to the glove and operates as the trigger mechanism. Upon tugging strongly on the pull mechanism using the ring, the quinque transforms into its active mode or deactivated mode depending on its current state. Upon activation, the quinque wraps around her arm and over the top of her hand, forming a gauntlet. Three grooves run around the length of the armor, pulsating a deep violet in contrast to the shining silver of the armor. Additionally, the blade is released and explosively forms outward. The blade itself is segmented, not unlike her kagune. The inner blade is the same violet color of the gauntlet’s grooves, while the blade itself is a shining silver. The bracer and the steel clasps act to give Hisae leverage when swinging or blocking with the blade. Additionally, the reinforced weave along her palm allows her to use her hand to also reinforce her blocks by open palming the blunt side of the blade without worry of severe injury. It is not possible to activate the bracer without also activating the blade, nor can she deactivate one without deactivating the other. 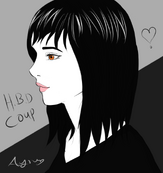 Retrieved from "https://tokyo-ghoul-roleplay.fandom.com/wiki/Hisae_Shigeki_Otsuji?oldid=7752"
Community content is available under CC-BY-SA unless otherwise noted.