Each and every movement infuriated him, not for the fact that he was losing but for the way. Her movements were all smooth and calculated, each movement careful but casual, like a ghost floating through the small forest. Like a Yurei.

Junko Kobayashi (小林純子, Kobayashi Junko) is an ex first class investigator, currently working as a vigilante and occasionally a mercenary. She grew up in Yokohama before moving to Tokyo, and has spent most of her life aspiring to become a Ghoul Investigator. Her alias is Yurei (幽霊)

She normally wears a black dress shirt and tan vest, with a black eyepatch over her left eye, which she lost to Maki Itokawa.

Her 'Yurei' outfit consists of a long white robe, with a slit cut down the left leg to allow easier movement, and leggings underneath. She wears black boots underneath, and generally always has her quinque gauntlets on.

She is missing her left hand after it was cut off by Kichirou. Her left hand has been replaced by her left quinque gauntlet, which has been repurposed into a prosthetic hand. It essentially forms two parts; a more standard white prosthetic, and a custom fit gauntlet which connects to become part of the prosthetic. The inside of this arm is hollow, and houses her knife quinque.

It's not visible for obvious reasons (clothes) but her body is covered in scars from previous CCG operations. The skin under her eyepatch and on the left side of her face is covered in burns, although her hair covers it.

In the CCG Academy Junko was a prodigy in the field of investigative work, but lacked in combat related subjects. In the CCG she had a reputation for being a kind, naive, and shy to a fault. More akin to a rabbit than a dove.

Nowadays, Junko was seemingly lost the majority of her naeivity, though her natural kindness and disposition towards shyness very occasionally show through, she does a good job of hiding it. Instead, she chooses to dawn the persona of a cocky, maybe even arrogant vigilante, leading to her gaining a reputation of being feared in the 14th Ward. This persona isn't entirely a farce, as she does garner some enjoyment out of her work, and knows that the ghouls she puts down are all ones that she views as evil.

Junko, as a result of her trauma she endured during 2016, Junko has essentialyl become a mute. As a coping mechanism for shutting down communication for fear of being hurt, she steadfastly refuses to speak to anyone, save for Toba and Akane on occasion.

It was shown during the Hospital raid that she likes puns. She's also mentioned that she frequently plays RPGs. She also watches anime frequently, her favorites being JoJo's Bizarre Adventure and Fist of the North Star.

When Junko was a child she got lost on her way home from School and a ghoul began following her. Eventually the ghoul cornered her in an alley and tried to kill her, but she was quickly saved by a ghoul investigator. After that she became obsessed with the idea of saving people the same way she was saved.

It's been implied that there's much more to her reasons for being so pacifistic and for joining the CCG, but she's made sure to keep her other reasons a secret. When she joined the CCG she became partners with Kichirou Kurosawa, working with him for all of Kichirou's time in the CCG. The two became friends over the course of the next few months until Kichirou would be kidnapped by Aogiri, with Junko losing her eye in the process. Once they finally met again Kichirou had become a ghoul, and while attempting to kill her he cut off her hand.

Junko's small height and size combined with her speed make her good at dodging, but she has very low endurance and can only withstand a few hits. She's exceptionally skilled with hand to hand, and has very good dexterity, causing her to be skilled with any small weapons. She's very agile and is knowledgeable in most fields of CQC.

Her missing eye causes her to have a blind spot on the left side. Because of her recently lost hand she isn't used to not being able to feel in the left hand has trouble gripping things with the prosthetic, although this doesn't matter much in combat. This can be seen as either a good thing or a bad thing, but because of this she has no feeling in her left hand, and damaging it would be difficult.

Appearance: Two black gauntlets that cover her arms up to the elbow, each with short claws on each finger and a red stripe that goes down the back. From a small part protruding from the end of the top of each gauntlet a red blade can extend, reaching from the back of the gauntlet to just past the finger. The left gauntlet of Ayumu has been repurposed into a prosthetic hand, however it retains the same function and appearance apart from she wears the left gauntlet under the sleeve of her shirt, unlike the right gauntlet which goes over.

Strengths: The gauntlets themselves can be used for punching, which focuses mainly on wearing down the opponent through hand to hand. Although the claws can be used to cut, they aren't very long so the blade is preferable when cutting is necessary. The gauntlets don't necessarily make Junko stronger, they just make her hits hurt more.

Mechanics: Towards the back of the top of each gauntlet is a small protruding section with a slit from which a red blade cane come out, reaching just past her fingers. This blade can be retracted at any time, and is very sharp despite it's lack of durability. The left gauntlet functions as a prosthetic hand, however it retains it's originally functions. Thanks for a slight modification from RIFT, the bottom of her prosthetic arm opens up to reveal a hidden chamber to hide Lancelot in.

This is Junko's preferred quinque, her first one, and by far the one she uses the most.

Appearance: Lancelot is a a black dagger with a black and white hilt, with two blades pressed together to form one blade (similar to a tanto in this appearance). When a button is pressed it spreads apart into two blades, leaving a gap used for parrying or trapping an opponents weapon. The bottom of the dagger opens up to release a wire leading back to Junko, allowed her to throw the dagger and pull it back. She sometimes stores it inside of her prosthetic arm. While still small enough to be called a knife, it's size is something between a traditional dagger and a short sword.

Strengths: The dagger's second mode works well for parrying, and it's small size works well with Junko's own dexterity.

Weaknesses: Like most daggers it's weak in range, although being able to throw it partially makes up for this. It's possible to cut the wire if she throws it.

Mechanics: The dagger has two functions: the blades can spread apart to allow a gap in the center for parrying, and the bottom opens up to release a wire leading back to Junko.

Lancelot is Junko's backup quinque despite it's exceptional rating, due to her own qualms about it's creation. Regardless, she is extremely skilled in using it.

Appearance: A dual bladed staff formerly used by Ashton Irika and then Kota Okada, obtained by Junko during the Aogiri Raid, when she fought alongside Hirako Kei. A lightweight staff with short blades are both ends, once capable of firing shards (though this function was never repaired).

Mechanics: All it's mechanics relating to retracting blades or firing shards have been lost or damaged, however it retains its usefulness as a weapon. 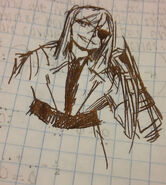 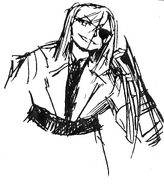 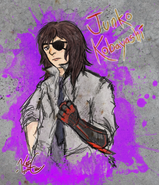 Another drawing by KC 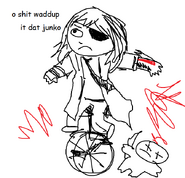 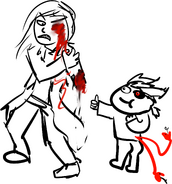 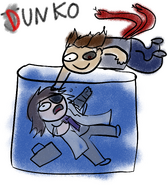 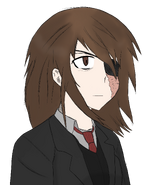 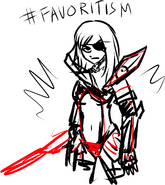 Retrieved from "https://tokyo-ghoul-roleplay.fandom.com/wiki/Junko_Kobayashi?oldid=8297"
Community content is available under CC-BY-SA unless otherwise noted.