Welcome to where Smoke was probably born, where my dad has probably killed, and where Haruna probably conceived. The sewer.

Kichirou Kurosawa (aka 'Shibito') is a ghoul working for Aogiri tree, where he is a lieutenant.

Once a human Investigator, he was kidnapped on Aogiri, and through mental conditioning and physical experiments, was transformed into a Proto-Ghoul. Since then, he has grown much more pessimistic although recently his old personality has begun to slowly come back. He displays a very large amount of loyalty to Aogiri, as he believes the organisation is just misguided but not fundamentally evil.

He owns a bar and runs it with his wife and partner/confidant, Charlotte Kurosawa (Scribe), located in the 9th Ward, which holds the largest store of information in Tokyo. He works here as a private investigator and information broker. To finance Zanzibar he sells information, sending any and all that will help with their operations to Aogiri.

Along with Scribe, he is co-leader of the 9th Ward for Aogiri.

Kichirou has piercing green eyes and brown hair. His hair is styled into a long wave, with a patch of hair sticking up that makes it look like two stylized horns.

He is around 5"10 in height, and is almost consistently seen scowling. His right eye resembles a Kakugan, with a red Iris and black patches that flicker and swirl within his white sclera. His casual wear includes black slacks and a white button-up with the sleeves rolled, as well as a black tie. His attire for battle is the same, with the addition of a black, dove-like coat.

Kichirou's right hand was cut off while he was being tortured by members of Aogiri. A Proto-Ghoul is weaker than even a normal ghoul, and so this wound didn't properly regenerate, and his right hand lacked skin, although this was mainly due to the wound being inflicted before the ghoulification. He regularly bandages and dresses his right hand, and wears a black glove to hide the unsightly condition. The wound has since healed, a sign of his increasing RC cells, but he continues to wear the glove, perhaps as a reminder of what he did to Junko.

Kichirou comes off as very sarcastic and bored, not ordinarily taking thinkgs seriously. Since his conversion to Aogiri, he has grown pessimistic and hateful towards humanity. He blames them for abandoning him, allowing his life to fall into shambles. He's also, in crude terms, kind of a dick to everyone he meets.

He is one of two loyal lieutenants of Aogiri tree, shared with his girlfriend Haruna Suzuki. Kichirou has demonstrated having an extremely conflicted personality, and needs reassurance that he is really on the right path. He saw Jack Conklin as a substitute father figure, and his capture by the CCG has further fueled Kichirou's vendetta.

Eventually, Kichirou murdered his own father. This severely affected his mental state, but not in the way one might expect. Kichirou saw this as a way to free himself, and is seemingly happier. His father had always loomed in Kichirou's mind due to the previous severe abuse Kichirou received by his hand. After killing him, Kichirou assumed his identity as the broker, and took Zanzibar.

In a rage, convinced he had no other choice, Kichirou attacked his former friend and partner, Junko Kobayashi. He realised half-way through the battle that he didn't truly wish to do this, but not before he cut off her hand. He showed mercy however, in calling an ambulance. They have since begun to mend those wounds, Kichirou going as far as helping Junko stage her 'forced-retirement' from the CCG. They often work together, and Kichirou is helping her finance a dojo. The wounds may never heal, but Kichirou and Junko may be called something close to friends again one day soon.

Kichirou is physically in a great condition. He has a very high amount of stamina, and when brute strength fails him he likes to tire out his enemy to the point of incapacitating them.

He isn't very fast, but he isn't slow to the point of it being a major weakness of his. When extremely angry or endangered, Kichirou becomes considerably stronger and faster, at the risk of his own safety, fighting much more recklessly and abandoning his training and humanity for a more feral style.

Appearance: Red, scaly. Each tentacle is about 3x Kichirou's height and decently thick.

Strengths: They are rather typical of rinkaku tentacles, with an expectedly high damage output.

Weaknesses: They are rather brittle, and Kichirou can only manifest a small number of them.

Kichirou's current quinque is Gungir, a halberd with the ability to transform into a battleaxe. This was provided to him by his friend Naoyuki who currently works for RIFT, after Rhongomyniad was climatically destroyed in the fight with Kouta Matsushita. 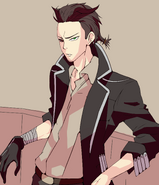 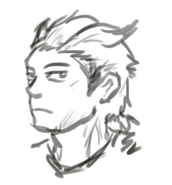 Kichirou's Halloween outfit
Add a photo to this gallery
Retrieved from "https://tokyo-ghoul-roleplay.fandom.com/wiki/Kichirou_Kurosawa?oldid=8236"
Community content is available under CC-BY-SA unless otherwise noted.