Lee (リー Ri) is a ghoul who resides in a apartment located in the 17th Ward.

The CCG refers to him as Raccoon (ラクーン Rakūn) due to him wearing a signature Raccoon mask and the shape of his kagune, which resembles a Raccoon's tail.

He works part-time as a assassin and mercenary for the Inquisitors, as a secondary source of income to sustain himself, and is also a active member of Aogiri Tree.

Lee is a 5'8" tall man with light tanned skin, slim and well toned muscular build. He has light brown spiky hair, golden eyes, and a goatee, along with a noticeable scar around his left cheek, and a mole under his right eye. He also wears a bead necklace.

While on missions or assignments, he wears a jacket, jeans, sneakers, and a randomly chosen masks.

Lee has a 'laidback' type of personality, he's lazy and never moves unless he absolutely has to. He has also a rather slow and calm way of speaking, sometimes crude or polite, depending on his current mood. Lee is also a person who is very hard to anger, mostly due to his lazy, relaxed, uncaring nature. He seems to be a bit selfish however, opting to do things for his own benefit rather than his peers around him.

Despite his usual laziness, he willingly participates in fights or events that interest him to a degree, rather it be battles against doves or battles against ghouls, just as long as they're not boring and slow.

Unlike most ghouls, Lee doesn't cannibalize, as he finds it to be a rather unnecessary method to achieve a higher level of strength, and instead chooses to rely on training his kagune and body to become a stronger ghoul.

As a Bikaku ghoul, Lee has no notable weaknesses like the other RC types do, which makes him an exceptional all-around combatant. And despite being lazy, Lee is no slacker when it comes to fighting.

Brawler: With 22 years of experience, Lee has brawler mastery in hand-to-hand combat. Being able to deliver painful fist and kick blows to his enemies, as well as take them. He rarely dodges his enemies's attacks unless they're very threatening and are sure to cause great damage to him.

Great Maneuverability: Lee can maneuver himself well with his kagune, and body.

Fair Movement Speed: Although still slower than Ukaku ghouls, Lee is faster than the average Bikaku.

High Stamina: Due to training his body and kagune to the extremes in his past life, Lee has a high stamina threshold, and is able to sustain himself in long fights, making it a rarity for him to become fatigue.

Strengths: With fair speed, high stamina, great maneuvering, and overall skill with his kagune tail, Lee is a tough opponent for anyone to face.

Weaknesses: Due to him not knowing a martial art, or having any finesse in his fighting style, Lee can have serious trouble fighting those who do.

Appearance: Lee's kagune takes the form of a thick and tail that's quite larger than the average bikaku tail. It takes the shape of a Raccoon tail and is vermillion + dark blue in color, along with appearing to have a ring pattern. The tail has small thorns(Similar to Yamori's kagune) to dupicate the fur spikes found on a Raccoon's tail.

Strengths: Able to cut through Rinkaku tendrils with ease. Excellent in mid-range combat. Balanced with no deafening weaknesses and easily controlled by Lee.

Mechanics: Lee's tail currently functions like any other tail seen on a Bikaku ghoul. 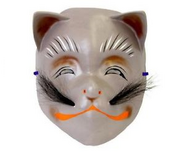 The Raccoon mask Lee wears on missions and assignments.

Better angles of Lee's mask.
Add a photo to this gallery

Retrieved from "https://tokyo-ghoul-roleplay.fandom.com/wiki/Lee?oldid=5829"
Community content is available under CC-BY-SA unless otherwise noted.