Start a Wiki
Sayuri (小百合) is a CCG investigator currently living in the third ward. Notable for her hatred of ghouls and dedication to exterminating them, she is the obvious daughter of the late Ren Kawaguchi.

Frizzy, fluffy red hair that falls to her shoulders. She's average in height and somewhat muscular despite her lithe build. Her face is naturally cute but wouldn't normally be described as beautiful; her eyes are a deep brown. She tends to wear a black peacoat on outings, or a bright red suit when in the office.  Following her encounter with Koharu Tagata, her face is covered in straight, white scars.

Though she was once loud and crude like her father, since learning of his fate by Kotetsu Torabashi, she's been much more reserved. She hates her father and lives her life trying desperately to avoid emulating him in any way.  Despite this, she's an avid drinker and not a little promiscuous, just like her old man.  She's very brutally honest, and has a deep hatred for ghouls, though the integrity of this hatred is sometimes thrown into question.  As time has progressed, she's grown increasingly sullen, and at the present is more likely to keep her thoughts to herself than she is to vocalise them.

Sayuri's induction into the CCG is slow at best. She spends her days wasting a way in a hot, sweaty third ward CCG branch, answering calls and dealing with her sole coworker, a mousy man known as Shigeru. After weeks at the grind and an awkward sexual encounter with her officemate, she eventually receives a call from Yamoto, one of her instructors at the academy. Yamoto reports that her request to browse the CCG Headquarters' documents has been approved. She walks there gladly and spends the day searching through records, ultimately concluding that the first step to finding her father would be at Anteiku. When she returns, she finds that the third ward office has been destroyed, a burning lotus left on the desk, and she is relocated to the first ward as a result. Soon afterwards, Sayuri meets with Nikki Futago to speak with regards to her father, though he has no information to spare. Sayuri, however, learns more about the true nature of ghouls in a sense that her time in the academy couldn't offer, and leaves with her ideals mildly shaken. At some point within this general timeframe, Sayuri spends an evening in the bar and meets a number of people.

Sayuri meets her new unit, the leader of which being Nakano Otsuji, and trains to a certain extent before embarking on her first mission, which entails the investigation of the Aogiri ghoul, Daren Blackshire (better knwon by his alias, Soundwave). Though she never does interact with Soundwave himself, the investigation takes she and her unit into the eighth ward, and they come into contact with a nefarious ghoul known as Yellowjacket. It is during this, her first battle both as an investigator and with her new unit, that Sayuri claims her first real success, incapacitating Yellowjacket so he can be taken in for questioning.

Shortly before the events of Starfall, Sayuri takes in Yellowjacket for questioning in regards to the ghoul Soundwave. During Starfall, she participates in the toppling of the SSS-rate kakuja Nikki Futago, harbouring resentment toward him for his relationship with her father.

Prior to the auction raid, Sayuri cooperates with her to capture the ghoul Centurion A by means of blackmail and extract information from him such that the CCG is able to pinpoint the Rose Club as the sight of an upcoming auction. She arrives fashionably late on the night of the auction to come into contact with the Black Rose. Their combat is neck-and-neck for the majority of the fight, with Sayuri suffering a number of gashes and wounds, but in the end she overpowers her comrade after his quinque shatters. Having killed a human, and one with whom she was familiar at that, Kinmaru's death causes Sayuri to call into question the means of the CCG, and how comfortable she is with the disposal of human life at the CCG's hands.

Not too long after Kinmaru's death, Sayuri enters battle with Koharu Tagata. She is far from successful and ultimately succumbs to the half-ghoul's strength. Koharu proceeds to torture Sayuri violently; Sayuri's mind melts into nothing but pain, self-loathing, and suicidal desire before Seph Winters comes to her rescue.

Sayuri spends the duration of this arc in recovery from her torture. She is visited by Seph Winters and Jiro Horikoshi and begins questioning her world view even further, but not much else occurs at this time. 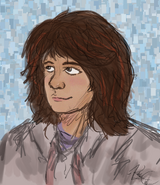 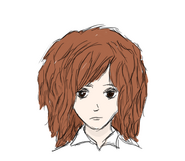 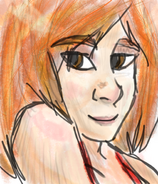 by /u/CardistryWolf
Add a photo to this gallery

She looked up at Seph and gave him a glance which she hoped expressed a fraction of her gratitude— her deep, abiding regard for finally having a proper family of her own after all this time. Violent, rotten to the core, and by every definition of the word, dysfunctional. But for Sayuri Kawaguchi, that's what a family had always been.

— Waiting In Line, And There's A Light On

Retrieved from "https://tokyo-ghoul-roleplay.fandom.com/wiki/Sayuri_Kawaguchi?oldid=8365"
Community content is available under CC-BY-SA unless otherwise noted.