Shidu (志津, Shidu) is a female ghoul and one of the two division leaders of the Inquisitors.

She is often the one to distribute contracts and rewards amongst the division members. While she is one of the highest ranking executives in Japan, she still serves as a subordinate to those from the main organization.

In the past, she was known as Patient, a ghoul who was known for breaking into hospitals, destroying their medical supplies, and departing before the CCG could arrive. These attacks occurred around eight years ago and suddenly ceased, leading the CCG to believe she had been killed.

Her appearance since then has changed, leaving only those who knew her face or scent to recognize her.

Shidu is a female of medium height, standing around 5'6" and bearing a lean-muscular build. Her hair is dyed a pale blue and is swept off to both sides of her face, coming down in longer strands near the front and fanning out in layers in the back. Her eyes are a dark brown color, although her expressions and tone of voice tend to give them a certain piercing effect.

Typically, she wears a layered white and black cloak that opens up in the front, similar to the style of the uniforms of CCG investigators. Her pants and boots vary in coloration but are almost always dark colors to avoid drawing attention. In more casual situations, she can be found wearing a black high-collared jersey with dark jeans and boots.

Her mask is almost entirely white, with a neutral mouth opened in a fashion similar to a grin and red stripes painted down from both corners.

Shidu comes off as harsh and unforgiving. She executes her actions with priority on the completion of her contracts, even bitterly killing her own employees on orders from command. Despite being indifferent, she can be angered through an us-versus-them mentality when those outside of the organization harm her employees. Additionally, she allows her employees to overstep their boundaries and brushes off their quips with little care. She has been shown lamenting the lack of respect in the newer recruits.

In more casual situations, she is easily flustered and jokes around with her own employees, becoming lighthearted and entertaining meaningless requests but remaining wary of threats. She has expressed disgust towards ghoul restaurants and greatly values loyalty, even more so than strength.

Shidu's life was sold even before her birth, when her low-class parents were offered a decent sum by the Inquisitors in exchange for a healthy baby ghoul whom could become their test subject. She joined hundreds of others in an unnamed facility similar to Kanou's, where she was raised nameless and with little consciousness of the world around her. As the Inquisitors, which were only a research group interested in ghouls at the time, experimented on their subjects, a majority of them died from the strain of the testing and left only those with superior regenerative capabilities to survive with battered bodies.

Ultimately, the Inquisitors failed to achieve their goal of advancing the capabilities of ghouls for weaponization and nearly all of the subjects were left in deteriorating conditions as a result of the testing. During this period, Shidu's RC cells were altered and lost the fluidity typically attributed to rinkaku types. In exchange for having a stronger, more durable kagune, her regenerative capabilities suffered heavy losses to the point where she relied on human methods of treating injuries, as shown when her graze did not immediately heal during her spar with Blackshire.

Needing to make up for their loss of funds, the Inquisitors tasked the failed subjects to jobs which suited them, in which it would not matter whether they survived or died. These were primarily illicit activities where it was best to avoid ties or records if the culprits were ever caught, but for nearly all of the subjects it was their first exposure to the outside world. Shidu was one of the few to survive these years spent carrying out tasks, utilizing her toughened kagune to cut down enemies before they could discover and take advantage of her lack of regeneration. Her and the other survivors were then recognized for their capabilities and considered to be official members of the Inquisitors, although the stigma surrounding them remained and they were kept under watch.

Shidu gradually entered the true world and climbed the inner ladder of the organization. She was fairly ruthless to her comrades but with good reason, slicing them down when they were tasked with assassinating her to determine if she was worthy of advancing and pushing down others in her way. Because of her harsh attitude, she was often beaten by those above her, who only spoke of her as though she were a weapon and wondered if the scientists in the labs had really succeeded in creating a living weapon after all. She came to accept that she was nothing more than property to be used by the Inquisitors, and wondered if she was lucky that her lifespan had been shortened by the experimenting.

Eventually, Shidu left the underground base and relocated to the 8th Ward to work under Haven, a ghoul hired by the Inquisitors who had quickly become one of their leaders. He, along with three others and several more grunts beneath that, resided over Tokyo and had turned the tables on their employers, now ruling over them. During her first encounter with him, resistance to unwanted advances led to a fight in which Shidu was completely overwhelmed, unable to defend against the onslaughts of shards that he could utilize with his four ukaku. He reiterated that the Inquisitors owned her and could end her life at any moment.

Soon after this, weakened by their fight, Shidu was cornered by several CCG investigators. Rather than allowing herself to be killed and turned into a quinque, she threw herself into the bay. Unbeknownst to her, a ghoul with an affinity to water resided on the shores of the bay and leapt in after her, thinking she would be a meal. When she discovered that Shidu was actually a ghoul, she brought her to shore and questioned her, wondering what had happened.

It would soon be discovered that the child also lacked a name, being a nearly feral child who had grown up in the rocky caverns by the bay and had survived as a result of her heightened physical resistances. She had assumed the name "Flumen" after hearing someone at the docks say it after spotting her, but lacked an actual name or recallable history. Due to her lack of education and exposure to others, she was also fairly childlike and did not understand much about the world, ghoul or not. This childlike, whimsical personality was a heavy contrast to Shidu, who had grown up rigid and structured. In time, she would come to be the first thing that Shidu wanted to protect aside from herself.

Returning to the 8th Ward, Shidu was asked by Haven to decide on a new name so that he could refer to her as something other than 'the failed experiment'. She decided upon her current name, and resumed her normal duties.

Sometime after this, she had a conversation with Flumen in which she realized that she would die far before she had lived a complete life. Using her resources through the Inquisitors, she contacted those who had experimented on her in the past and was told of ways she could prolong her life, but unable to deal with the webs of traders and manufacturers, she resorted to raiding hospitals, destroying heaps of supplies in the process so that investigators would not be able to pinpoint what it was that she desired. It was then that she was given the name "Patient" by the CCG and given a rating of S-.

To be continued some other time.

Shidu was the main organizer of the Inquisitors' initiation. The new recruits were instructed to meet her at an empty cargo warehouse on the northern side of the 4th Ward, where they found a local politician bound to a chair in the middle of a photo shoot. The task was to torture him and obtain photos to send back to the contractor. Shidu urged the recruits to do so, and expressed mild irritation when they went overboard and killed him too quickly.

When some school children using the shortcut mentioned in the intro post ended up becoming accidental witnesses to the scene, she ordered the recruits to kill them.

Meanwhile, Shidu also paid one of her employees, Miruno, to host an open training session at her studio Ri-su-to in the 4th Ward.

After Miruno was hired as a mercenary by Aogiri Tree and We've Gone Rogue and was unable to fulfill her objective, Shidu received orders to kill her and did so after a brief clash with another one of her employees, Yamazaru. During their fight, she urged Yamazaru to stop disguising himself as Miruno's deceased comrade Sutaya and praised his cleverness in disguising his rinkaku as a bikaku before killing him as well.

At Ran's recommendation, Shidu sent out invitations to several ghouls throughout Tokyo that had caught her interest, beckoning them to collect corpses in the 20th Ward and bring them to a specified drop off point for payment. As she expressed to Daren, the willingness to negotiate in several of those she had approached disappointed her.

Shidu was first seen giving a mission to her employees to attack Anteiku while its members were out dealing with the newly arrived Doves in the ward. Their objective was to kidnap Xeno, which they accomplished.

Following the hospital raid by Aogiri Tree and We've Gone Rogue, Shidu was seen catching Ran and killing Tatsuhiro after Ran flung them both off of the roof of a nearby parking garage in an attempt to kill them both. She mocks the absurdity of Tatsuhiro's quinque before destroying it.

Later, when Ran lures Nikki to the 8th Ward using Xeno as bait, Shidu interferes again after Ran's injuries from his previous fight with Tatsuhiro result in him being badly beaten by Nikki. She threatens to kill Nikki in Ran's stead, forcing him to take Xeno and retreat. After Nikki leaves, Shidu picks up Ran's quinque and briefly points it at his neck before sheathing it and carefully taking Ran back to Yuureien.

One of their informants, Marco, informs Shidu of a half-ghoul spotted in the 23rd Ward. After a brief consultation with Ran, she departs and retrieves the partial ghoul, bringing him back to Yuureien after playing on his aversion to killing.

Shidu assigns Mei to bribe one of the four Aogiri guards assigned to Satoshi's lab in order to find out its location. She then orders several of her subordinates to raid the lab for both his experiments and the scientist himself, timing it to fall on the same day as the CCG's raid on Aogiri Tree's main base in the 11th Ward.

Near the end of the lab raid, Shidu herself shows up from one of the tunnel entrances in the basement and takes out Achille, although she spares him and leaves him to exit through the tunnels. She checks on Kane before heading upstairs and going through the research left behind by Satoshi, spending an hour ignoring Maki before she finally acknowledges him only to mock his failure.

Like Ran, the full extent of Shidu's capabilities are unknown. 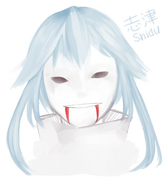 (Concept art for Shidu's Kakuja.)
Add a photo to this gallery

Retrieved from "https://tokyo-ghoul-roleplay.fandom.com/wiki/Shidu?oldid=5844"
Community content is available under CC-BY-SA unless otherwise noted.