Shouwei (Shǒu Wèi) is the Head Butler to the Zhi siblings and a ghoul of Chinese decent. He is the "Rook" of The Red Sun and currently lives and works at the Ivory Castle Estate in the 20th Ward.

Shouwei is tall at 6' with tan skin darker than most of the other residents of the Estate. He has distinct chiseled features and a heavily muscled build, especially around the arms and chest. He is rarely seen out of uniform.

Shouwei feels no doubt and empathy for most. He is cold and focused, willing to tell others off if necessary regardless of rank or title. This makes him an excellent Head Butler and an unquestioning killer. He believes ethics and morals are pointless even among humans, and that among ghouls they serve absolutely no purpose. Power and knowledge is what he finds important. If he’s ordered to do something, he may as well get it done effectively. He has a stoic demeanour and an explosive temper which more often than not vented in sudden bursts of violence, although this is always done away from the eyes of the siblings. It has been shown that at times he exhibits a sadistic personality, in that he often attempts to bring out the worst in those he deems interesting, forcing them to do things that break them psychologically. He is intelligent, if single-minded, he isn’t known for multi-tasking and prefers to complete one job at a time from his mental list. However, he can plan meticulously with one aim in mind.

Brainwashed from a young age, deep inside he resents those who have set him in this position. This much has been ascertained by various conversations with Liao, and reminiscence of their past.

He doesn’t speak unnecessarily unless something has truly peaked his interest, or in a situation in which he has the capacity to create something interesting by verbal manipulation.

- Extreme strength/endurance (Unless rc cells are depleted after kagune use)

- Little to no agility.

- Slow over average to long distances, capable of short bursts of speed with the aid of momentum.

- Kagune use greatly reduces endurance, strength and his ability to release his kagune.

Shouwei's kagune is a koukaku, taking the form of two massive steel-like shields that he wields on both arms. They are wider than himself, and extremely hardy, but this is paid for in their weight and unwieldy nature. Regardless of this Shouwei is well versed in the use of his kagune shields, and can use them with relative ease. They do not change size however, so are awkward to use in confined spaces. The shields have two spikes on the lower side of the shield that allow them to dig into the landscape, or enemy flesh.

In combat, he commonly arranges them similarly to that utilised by the Roman military, supporting on shield on top of the other like in a tortoise formation. When idle he plants them in the ground, thereby reducing the strain on his arms and pectoral girdle. Unlike many ghouls kagune which retreats into their body when not in use, only a small amount of Shouwei's kagune does so, the rest is shed off onto the ground to slowly degrade. The shed kagune will often hold it's shape well for up to minutes on end, however Shouwei has no control over it. Instead he will often use it as a temporary shield to wrap-up the fight, as after one kagune release his rc cells are heavily depleted due to the inability to withdraw the majority of kagune. After a fight Shouwei often needs to retreat for long periods of time to binge in order to increase his RC level back to a normal level.

Shouwei Original Concept Art~ By Me 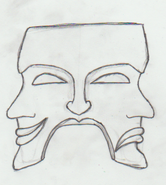 Kagune
Add a photo to this gallery

- Old art by me, new art by the fantastic JokersMaze.

Retrieved from "https://tokyo-ghoul-roleplay.fandom.com/wiki/Shouwei?oldid=8225"
Community content is available under CC-BY-SA unless otherwise noted.