Sierra Gray (シエラ グレ) is a ghoul who resided within the 7th Ward. It was revealed that she ran away at a very young age, starting a new life. Her real name is Alice Kingsley (アリス キングスレー). She was previously attending university to become a surgeon and was previously employed as a waitress at Anteiku

She was a part-time member of the Inquisitors, though she displayed reluctance in the tasks she was asked to complete.

Sierra appears to be a rather uncertain ghoul, expressing hesitation in working for the Inquisitors but explaining that the affiliation is being used to further her own goals and make money on the side.

In several of her appearances, she immediately displays panic and shock at her own violent actions, though she shows significantly less to no hesitation before or during them. Following the death of Investigator Galveston during her first job, she broke down sobbing but explained it to others as a reinforcement of her act. She attempted to justify her own actions by explaining that he was a sociopath, suggesting that she must constantly reassure herself that what she is doing is correct in order to come to terms with her own actions.

It is revealed that this stems from childhood abuse, as she fears the "retribution" for her actions that was common in her household, not feeling in what her own words is "True Guilt"

In Falling and Fading Facades, her morbid side was revealed, showing how she is, in truth, a selfish person only interested in pleasure and self preservation. For example, she stated how she would kill Madi for survival, if needed, or how she was only dating Hibiki for information. By the end, she was giving brutal and horrendously offensive comments due to her annoyance. It was revealed this outburst was her being unmedicated as she has mild bipolar disorder.

Casually, however, she seems quite bubbly and flirtatious, interested in the squeamish reactions of the men she interacts with. She also displays her intelligence in even the smallest things, such as her impressively in depth analysis of the card game of Go Fish, resulting in an immediate win.

Sierra (at the time, Alice) was born to a hardworking father and an abusive mother. Her mother would commonly beat her for any minor wrongdoing. Not only this, but she would also beat her husband in an attempt to get him to retaliate, and thus, she would be able to arrest him and have him discovered as a ghoul.

Her father, having taking enough of the stressful home environment, left for Osaka when Sierra was at a young age. She has expressed that she does not hate her father for leaving, she hates him for not taking her with him.

At the young age of 16, she ran away to the 7th ward, a sketchy and dangerous ward where she became a dealer. After earning enough money, she illegally purchased a new birth certificate and identity, creating Sierra Gray. From there, she worked many jobs and did 'many unspeakable things', earning enough to attend Kamii University, where she studied to become a heart surgeon.

She is currently interred within the ghoul prison Cochlea in the 23rd Ward after the CCG discovered her relationship with the investigator, Hibiki Maki.

Ace's tail: Sierra's kagune is an Ukaku, however due to her adept ability to manipulate the shape of her weapon, is formed in a Bikaku tail-like shape. She claims that she is not an adept fighter, however her system of 'Aces' has proven useful in battle. The first of these 'Aces' is fooling the opponent with her Bikaku-eqsue tail shape, and then flowering her kagune out into the normal Ukaku and attacking at range. Her second 'Ace' is to form a sword-like shape out of her RC cells, and detach it in a 'natural quinque'-like weapon.

Mother's intellect and love: She has a strong sense of protection for Madi, as well as the disdain to kill, especially directly. This is known to be her weakness. This is countered by her intelligence, which she has displayed time and time again.

Krav Maga: Hand to hand is her specialty, allowing for such close combat that kagune are effectively useless. When combined with her knowledge of Krav Maga, she can effectively delay opponents. She is unfortunately unskilled enough to adequately fight using only this method.

Sierra is currently in a relationship with the reserved investigator. The exact dynamic of their attraction is unknown. While Sierra has claimed that she only is dating him for information, there does seem to be some attraction, both physically and emotionally. The CCG discovered their relationship and Sierra was detained into Cochlea as a result.

Sierra has claimed harshly that she is taking care of her out of guilt, however the seemingly genuine motherly affection of her seems to suggest otherwise. Sierra is very much a mother and a friend to her.

Sierra has a playful and sarcastically flirtatious aura around him, messing and teasing him when possible. She sees him as a strong ally and good friend, and cares for him deeply.

Sierra sees her as a threat and employer, and detests some of her brutal methods. This said, as of recently, she has been seeing more of her human side, and has taken a liking to her. While friendship is a strong word, she is fond of her presence off hours.

Sierra has expressed extreme hatred towards him due to his weak appearance, shouting brutal insults until he cried. He is said to bring out the worst in her, and she absolutely despises him.

Sierra is fond of his cute and light hearted attitude, joking around with him despite his status as an Investigator. She seems to be friends with him, and enjoys his company.

Sierra has expressed extreme friendliness towards her, joking around and talking extremely casually. They appear to be very close. 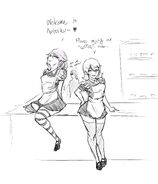 Add a photo to this gallery
Retrieved from "https://tokyo-ghoul-roleplay.fandom.com/wiki/Sierra_Gray?oldid=5846"
Community content is available under CC-BY-SA unless otherwise noted.