Silas Aberdeen was a reclusive and mysterious ghoul newly arrived to the 8th Ward from the isles of Chile, from which he admits is not his home country. Silas left Chile for unspecified but personal reasons. He is currently retired.

Silas has dark hair and piercing grey eyes. He has an fairly distinctively grizzled and serious facial structure, with high cheekbones, an angular nose and a long chin with thin lips. Additionally, he also has a mole above the left side of his nose almost in line with his eyebrow.

He is tall by most standards with a relatively built body shape that suggests his inherent strength.

As Horus, Silas wears an Egyptian styled mask reminiscent of the sky God Horus. Over this he wears a loose dark hooded cloak fastened at the throat that falls to his knees. On his feet he wears calf high dark brown leather boots.

As The Hangman, Silas wears a grim looking metallic mask with sharp dagger like projections from the lower side where the mouth would be. He also wears a black western cowboy hat and a charcoal grey trench coat over a white dress shirt and black jeans. He wears a loose dark purple tie and black boots.

It doesn't take much to tell that Silas isn't much of a talker, preferring the solitude of his own company. Needless to say he isn't comfortable in the bustling day time streets of the 8th Ward, taking to libraries and quiet back alley coffee shops throughout the day. He is extremely loyal and friendly to those he likes with a tendency to act apathetic in some situations. Realistically he listens intently.

When hunting Silas is completely silent, as his tell-tale accent and speech patterns would surely give him away as a foreigner in Japan. He has a strong sense of justice, and is prone to vigilantism, especially in the case of rapists, as shown by his murder of Yutaka Toshirou shortly after his arrival in Japan.

At heart Silas is a pragmatist, reasoning that if he was born with the means to kill he may as well make a living out of it.

Orphaned from a young age, Silas grew up on the streets of Aberdeen, Scotland alongside side five other orphans. Together they were a family, something which transcended the biological differences between them.

At the age of 12, this family ended abruptly when in a single night, the only other ghoul, Marie was killed by the White Coats. Desperate to survive, and worried for the fates of the rest of his family, the young Silas rushed back to the docks from which they lived. Upon arriving the child discovered the raped and mutilated corpses of his family, the three culprits, members of a gang who controlled that area of the city. Going on a rampage, Silas killed and injured one before being beaten to the ground and threatened by the last. He was however saved by a mysterious and well-spoken man, Ethan, also known among some circles as the Butcher of Aberdeen.

Back in Chile, Silas made a name for himself working as a freelance assassin working for both the government and private organisations. As Horus, Silas was a brutally efficient killer, known for sudden and unexpected decapitations and hit and run tactics. However, Silas went under another alias back in Chile. That of The Hangman. As The Hangman, Silas would stalk the back allies of Chilean cities, particularly around bars and quiet areas. That night a woman would tell her family and friends how a black cloaked man had rescued her from a rapist the night before, before departing without a word, dragging the rapist with him. The next day a castrated and dismembered man would be found hung by the neck from a post by the side of the road a short distance from the attempted rape. On further investigation his genitals would be found in the nearest trash can.

Ukaku- Silas' kagune takes the shape of 4 dark rigid crystalline protrusions from his upper back connected by purple and orange flames, giving them the appearance of wings. 2 stumpier protrusions burst forth and angle down his back, these are useless in combat. His kagune is in a constant state of decay and regeneration, shedding flakes and puffs of flame constantly. When hardened temporarily this ceases.

When in combat he focuses all his rc cells into one hardened blade that sits over his shoulder and around his right arm. This helps to marginally increase his stamina in combat.

Even for an Ukaku ghoul Silas is extremely agile and reasonably fast. This ability stems from self training as a free-runner from an early age and has also influenced his preferences of rooftops as a means of movement around the city.

In combat, Silas prefers to take out the enemy before they are even aware of his presence. Disliking face to face combat he prefers to stalk the rooftops and attack from above, returning to the rooftops if he is outmatched or when his prey or enemy has been killed or scared off. When he attacks, he prefers to punch rather than kick. He also favors the use of spins, using his crystalline kagune to dismember his targets.

Low Stamina- He is severely handicapped in protracted combat as his kagune releases RC cells at fairly high rate despite it's primarily permanent crystalline nature, severely reducing his stamina.

Weak Projectiles- Unlike most other ukaku users, his projectiles are extremely small and weak, their only use in combat being as distractions or to blind an enemy in close range.

Ear Defect- Silas was born with deformed eardrums, rendering him sensitive sound. Despite giving him exceptional hearing, loud noises such as explosions, gunfire and shouting can cause him intense pain. In combat Silas wears ear plugs to block out loud noises.

One-Shot: A Long and Storied Past: Part 1 Edit

A prequel to the character known as Silas Aberdeen.

Implied to be responsible for the violent murder and hanging of the 8th Ward businessman Yutaka Tohshirou. Silas watches the television report verifying the the mans death catatonically from the corner of a coffee shop.

Private RP: A Night on the Town Edit

Intending to make an example of another serial rapist and murderer, Silas finds out he was not the only ghoul who has their eyes on the man, a young ghoul known as The Scythe intended to make a meal out of the man.

Déjà vu. Silas encounters yet another ghoul, Akane Hayashi while hunting a child rapist. This ends in Silas joining Colorless.

Silas ambushes and kills the target alongside The Lycan.

Silas gets BTFUp alongside a youth. Later meets Nikki.

One-Shot (The Grand Finale): A long and Storied Past Part 3: Bringing it to a Close Edit

Silas met Toba while hunting and knows him under the alias 'The Scythe'. Silas took a liking to him and accepted his request to provide aid. They parted as allies and Toba is now his contact in the 11th Ward.

Silas met her briefly while hunting, he is curious about her although he doesn't even know her name. She recruited him into Colorless.

- "What are the motivations, the ideals that drive these people so that they fall so deep into the mind-numbing pleasure of death?"

- "I ask you, who should bloody their hands if not a monster? For that is what we are."

- "Not every path is one which can be backed out of so easily... Let's just say my path is soaked with the blood of many an ally and adversary. Meeting my mentor guided me to this path, and his death locked me to the rails of it."

- "... what happens I wonder, when you wear a mask for so long that you forget who you were beneath it? You could say that is the root of many a great man or woman, the unconscious action of lying not only to others but to yourself. It however does not always lead to greatness. More often than not it leads only to regret... To this day I still don't know when a put on this mask, or if it even is one. Lines blurred long ago are not so easily repaired. It makes it difficult to backtrack out of your path" 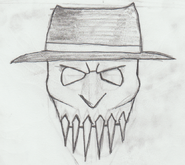 - Silas enjoys music being played at low volumes in the background. Specific genres he enjoy include: Jazz, funk and orchestra.

- His mask and name are not the only traits shared with the Egyptian God Horus, he also shares the gods affiliation with the sky, favoring to attack from above. Horus is also the god of hunting, an interest shared by Silas in his penchant for hunting his victims and targets endlessly from the rooftops.

- Silas was born with a defect known as SCDS (superior canal dehiscence syndrome) wherein part of his temporal bone is defective, leading to an extreme sensitivity to sound.

Retrieved from "https://tokyo-ghoul-roleplay.fandom.com/wiki/Silas_Aberdeen?oldid=7564"
Community content is available under CC-BY-SA unless otherwise noted.