Yukiteru Urushiyama (漆山 雪輝, Urushiyama Yukiteru) is an Aogiri Tree ghoul. Recently, he's resided in the new Aogiri base, but his hunting grounds are the 16th Ward. He's known to the CCG as Emaciated (衰残, Suizan).

Yuki is tall and unhealthily thin. His form gives off the impression that he is starved, due to the fact that for his height, he has little to no body fat. Whether this is from malnutrition or his natural appearance is unknown even to him.

When first introduced, Yuki had straight, black hair that he wore in a short fringe in the front, but a little longer on the back and sides. From under his hair, he has a pair of striking violet eyes.

When it came to attire, Yuki was generally seen wearing the uniform of his college, that is, a white dress shirt tucked tight into beige slacks, which only helped to accentuate his weight. On he feet, he wore dress shoes, and around his neck, he wore a red tie. Most of the time, he had a pair of earbuds hanging out of the collar of his shirt or in his ears. Casually, he wore dress shirts and skinny jeans.

Yuki's mask covers from his chin to his cheekbones, and is dark grey in color. It is rather plain, except for a mouth opening with red strings forming three Xs through it, giving the impression that his mouth his sewn shut.

Since Kami has died, he's dyed his hair white in remembrance of his friend and allowed his hair to grow to excessive lengths, where it hangs over his face. His attire has changed as well, his college clothing being abandoned for regular dress-shirts worn underneath a black trench coat for extra edge effect.

Yuki was a stereotypical nice guy when he first made his appearance. He was kind and made an effort to help people out while getting to know them at the same time. His kindness was often construed as trying to get in people's pants, which didn't really give him a good standing with many.

When threatened, Yuki became sarcastic and rude, attempting to sass his enemies into submission. This didn't exactly work, and due to this, he didn't have many friends and made many enemies.

After Kami's death, survivor's guilt seems to have taken its hold on Yuki.

In his interactions with others, his personality has become much less high-strung and much more lax. He is still very sarcastic, but as a whole, he seems more neutral and laid back, his outlook on life more serious than before.

Yukiteru was born to young ghoul parents. They lived comfortably in a small apartment in the 14th Ward. His parents were very careful in getting food, because they didn't want to endanger themselves or their new kid.

When Yuki was 7, things turned around. His parents were caught while hunting and exterminated. The CCG came after him, and he escaped onto the streets. The boy was devastated. He drifted until he ended up in a foster care center.

Five years passed. Yuki came to realize that he enjoyed reading and learning, so he retreated from social life. He managed to get by on food by running away frequently. Eventually, a pair of humans adopted him, and he went to live with them and their older son.

Life with his adopted parents was good for Yuki. He came out of his shell and began to interact more, until he became the joker in his group of friends. He grew somewhat close to his older brother, and came to respect the boy. The one negative aspect of this was the fact that Yuki was unable to get food often, because his new parents enforced a strict curfew, which was later than Yuki could safely hunt.

Because of this prolonged period of starvation, Yuki began to look malnourished, and it began to effect his thought processes. Five years after being adopted, and after his brother had left the house, Yuki lost it due to his hunger and killed his adoptive parents, before eating them. From that point, he continued to act like his parents were still alive around other people, while using the money they had saved up to support himself. His older brother eventually found out, and Yuki, knowing that his brother had nowhere near the ability of a ghoul, began to toy with him, in hopes that one day, his older brother would become the best meal. He graduated from high school two years early and top of the school, and went to a local college.

Appearance: Resembling an unstable set of bird's wings, Yuki's ukaku are bright red near where they erupt from his back, and as they go farther from him, they become a ligher shade of blue. His wingspan is at something like 10 feet from tip to tip.

Strengths: Yuki's kagune isn't that different from a regular ukaku. It shoots medium-sized crystals at an average speed.

Weaknesses: As above, Yuki's kagune has the same drawbacks as a regular kagune. He tires really quickly, but especially so, because of his weak physicality. 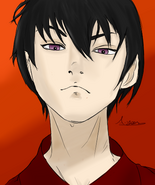 Retrieved from "https://tokyo-ghoul-roleplay.fandom.com/wiki/Yukiteru_Urushiyama?oldid=7558"
Community content is available under CC-BY-SA unless otherwise noted.