Zhi Liao is a powerful ghoul of Chinese descent that is currently living in the Ivory Castle Estate located in the 20th Ward. She is the "Knight" of The The Red Sun.

Sporting an extremely attractive hourglass figure, Liao takes considerable pride in her looks. Being of average height and frame, she is 1.75 m tall and weigh 68 kilos. Despite her bone structure not exactly being athletic, she is quite fit and possesses considerably physical ability. Her sharp facial features, dark grey eyes and fair skin are, while cold, shockingly beautiful and enticing. Letting her long, light-brown hair run freely, Liao is happy to showcase her amazing body at every occasion she gets. Liao's usual attire is a white, sleeveless kimono that underlines her features, with a single line of golden embroidery running down its length.

Extremely assertive and outright domineering, Liao's confidence and her belief in her own authority is astonishing. She believes that everyone should be on their knees for her if she wants them to be. She is highly whimsical and only does anything if she feels like doing it. Cocky and arrogant in every way possible, Liao never shows respect. It's always just good manners. When it comes to the few people that she does find interesting, or has already established a bond with, she shows incredible patience and restrains herself from treating them horribly. In social situations, Liao usually behaves softly and remains relaxed until something happens that evokes a stronger emotion within her. 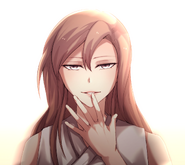 By /u/JokersMaze
Add a photo to this gallery

Retrieved from "https://tokyo-ghoul-roleplay.fandom.com/wiki/Zhi_Liao?oldid=8035"
Community content is available under CC-BY-SA unless otherwise noted.